It has been noticed by more than one tax attorney that celebrities sometimes find themselves underwater with debt and unpaid back taxes. Of course, tax problems can pop up for virtually anyone, but, for actress Tori Spelling, they seem to come with alarming frequency. Recently, the former Beverly Hills 90210 cast member was charging a $95 “entrance fee” for a virtual meet and greet, and tax trouble and other debts may have been the motivation behind this bold move. 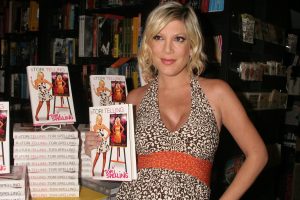 According to Us Weekly, this past April Tori Spelling had monies taken from her bank account to pay a high tab previously run up on her American Express card. The money was taken after the Los Angeles County Sheriff’s Department completed a writ of execution which American Express had won against Spelling in March of this year. The 47-year-old actress had accrued a debt of over $80,000 to American Express, and, as a result, two separate lawsuits were filed by the company in an attempt to collect on the debt. One suit was for $88,000, and another for just under 38,000. Spelling was initially sued by the finance company for failing to pay credit card bills dating back to 2016. Our tax attorneys do not know the exact amount she currently owes to American Express, but it is clear she is no stranger to money problems.

A separate case was filed against the actress and her husband, Dean McDermott, by City National Bank, which also alleged they were owed a significant amount of money from the couple, totaling over $200,000. In May of 2017, City National Bank demanded that Spelling and McDermott pay them $202,066, the amount of a judgment previously awarded to the bank in court. The bank stated that the bill was never paid, and a hearing was set. A bench warrant was issued after Spelling failed to appear at the hearing. In April of 2019, the warrant was ultimately dissolved, but the couple’s financial problems were not.

In addition to monies allegedly owed to banks and credit card companies, the State of California claims the two owe back taxes in the amount of $282,000. Spelling and McDermott also faced a $707,000 federal tax lien in July of 2016, which included back taxes for the years 2013 and 2014.

In her 2013 book, Spelling stated that despite attempting to embrace a simpler lifestyle, she couldn’t seem to “let go of expensive tastes,” alluding to the fact that her income may no longer support the lifestyle she prefers. Her $95 charge for a virtual meet and greet during the worst of the virus pandemic shutdown was received negatively by some and described as simply a way for the star to raise money for herself. It is not clear whether the couple has sought legal advice, or if they plan to speak to a tax attorney about their private debt or back taxes.