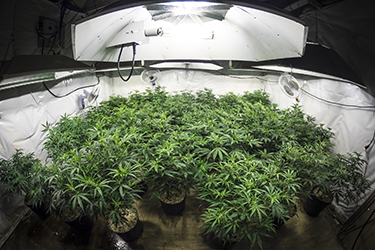 Recent reports have revealed that the cost of purchasing legal marijuana in California could be high enough to drive away potential consumers — and keep the black market thriving. According to a Fitch Ratings report, taxes for legal cannabis in California could be up to 45% in certain parts of the state, among growers, retailers and customers.

Consumers of marijuana in California must pay a combination of local and state taxes that will vary depending on location. In addition, sellers and growers are also taxed at a specific rate. The consumer tax rate will go all the way up to 24%  including a 15% state excise tax along with other local and state sales taxes.

Taxes for businesses will range between 1% and 20% of gross sales, or $1-$50 per square foot of cannabis plants. Additionally, farmers will be taxed at a rate of $2.75 per ounce of marijuana leaves, and $9.25 per ounce for cannabis flowers.

Although California legalized medical marijuana over 20 years ago, recreational marijuana retailers have only recently begun to ramp up their production. The bill to legalize recreational cannabis use in California was passed over a year ago during the 2016 election, but the new legislature does not take effect until January 1, 2018.

It’s worth noting that Washington is the only one of the eight states where recreational marijuana was legalized has a higher tax rate than California, with a tax rate of 50%.

Washington and Colorado have tried multiple different tax structures resulting in conflicting results. For example, in 2015, Oregon began with a weight-based tax of a flat $35 per ounce. However, the state eventually changed this tax structure to a flat sales tax of 20%. Colorado eliminated its 2.9% sales tax, but escalated its excise tax to 15% from its former amount of 10%. This obviously raised the overall tax rate on marijuana.

The recent legislature to legalize recreational marijuana hasn’t done much to ease the controversy among citizens. The debate continues to rage on among politicians, community leaders, and private citizens.

There has been some backlash from different public interest groups and religious leaders regarding the upcoming January 1st landmark. Critics have been outspoken about the message this new legislation sends, and what the long term effects will be to California.

According to Citizens Against Legalizing Marijuana (CALM) has the following to say “We affirm the 2006 FDA finding and vast scientific evidence that marijuana causes harm. The normalization, expanded use, and increased availability of marijuana in our communities are detrimental to our youth, to public health, and to the safety of our society.”

While the critics have certainly been loud, there has also been overwhelming support for the new law. When asked for comment, one business owner in Sunnyvale said “Listen, I don’t touch the stuff myself, but I also don’t think it’s any of my business what other people do with their lives. The studies I’ve seen suggest that marijuana can be helpful for some ailments, and it’s certainly safer than alcohol or cigarettes, so what are we waiting for? It’s everywhere already, we might as well tax it, right?”

Whether you are for or against the recreational sale of marijuana, January 1st is rapidly approaching and that will mean new tax revenue. Our bay area tax attorneys will be closely monitoring the situation, so be sure to check back for updates.