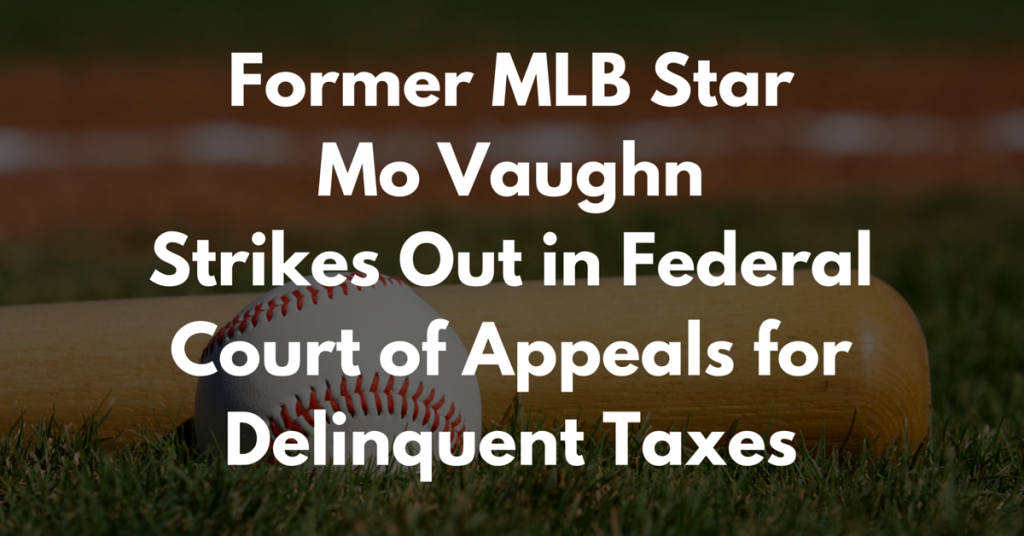 In the United States, we have unfortunately become accustomed to seeing celebrities, including athletes, in the news for tax problems and delinquencies. It seems that more often than not, celebs trust their investments, budgets, and even yearly tax filings to tax professionals, or financial planners. This was the case for Mo Vaughn, a former Major League Baseball player, who unfortunately learned the hard way that you should trust your financial advisors, but should also verify that your taxes have indeed been filed.

A federal appeals court ruled that former MLB American League MVP award winner Maurice “Mo” Vaughn is liable for unpaid taxes and penalties, even though a former financial advisor embezzled nearly $3 million of his money. The ruling stemmed from a December 2012 federal civil lawsuit filed by Vaughn after the IRS fined him more than $1 million for unpaid taxes.

According to court documents, in 2004 Vaughn entrusted Ra Shonda Kay Marshal and her company, RKM Business Services, to handle his finances. Upon hiring Marshall, the former MLB slugger signed a Power of Attorney giving her authority to file and pay taxes on his behalf, as well as control over his funds.

In 2008 after deciding that he could handle his finances on his own, Vaughn terminated his business relationship with Marshal. He stated that only then did he discover the unpaid debt, as well as the missing funds from his sizeable fortune. Rather than investing Vaughn’s money, managing his accounts, and paying his taxes, Marshall drained his portfolio, stole his money, and failed to file his taxes in 2006 and 2007.

In his 2012 civil suit, Vaughn argued that RKM and Marshal were hired to manage his finances, and were therefore responsible to have paid his taxes on his behalf.  The resulting judgement awarded him $1.5 million from Marshal and $3.5 million from RKM.

Unfortunately, the Internal Revenue Service argued that despite the fact that Mo was scammed, he could not avoid the penalties for having failed to file his 2007 income tax returns. Vaughn contended that he had reasonably assumed that Ms. Marshall would take care of these issues and that he had no reason to have known that his 2007 tax returns had not been filed, nor that his 2006 or 2007 taxes had not been paid.

Vaughn appealed to the Sixth Circuit court, arguing he should not be responsible for his financial agents’ actions because he employed ordinary business prudence in hiring them, and their fraudulent behavior left him unable to pay his taxes. However, the three-judge panel held that because the circumstances that led to Vaughn’s late filing and payment were under his own control and subject to his attention, he did not satisfy the “reasonable cause” exception to the penalties owed to the IRS.

Appellate Judge Alice Batchelder stated, “Taxpayers are not expected to be experts on the tax code, but they are expected to know that they must file a return and pay their taxes. Mr. Vaughn is not facing penalties from the IRS because he relied on the advice of his agents; rather, he is facing penalties because he relied on them to complete and file his tax returns.”

Vaughn was one of the most feared batters in the American League in the mid 90’s, and his prowess at bat earned him the nickname “The Hit Dog”. From 1991 to 2003 he played as a first baseman for the Anaheim Angels, the Mets, and the Boston Red Sox, with whom he won the American League MVP award in 1995.

Mo retired in 2003 and founded a trucking company, Mo Vaughn Transport. His new business venture is one of 3 companies to collaborate with the Cleveland Indians this off season in an effort to augment the franchise’s local youth service programs.

If you have unpaid or delinquent taxes and need the help of an experienced tax attorney in Burlingame, San Mateo, Hillsborough, or the entire bay area, Tax Helpers is standing by to assist you! Call us today for a free consultation at 1-866-TAX-TAX-5.