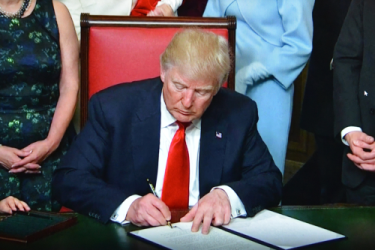 President Donald Trump has consistently stated there was no wrongdoing on his part regarding his taxes, but experts maintain that if state and federal authorities find him guilty of tax crimes, he could be fined tens of millions of dollars. Initially, a New York Times report published information claiming that the IRS was cheated for decades by Trump and his family.

If this is the case, financial penalties may be quite severe. Experts state that such penalties may include a fee of double the amount of unpaid state taxes and as much a 75% of the unpaid federal taxes.

The 15,000 word report published by the Times was studied by the New York Tax Department, and the latter said they will pursue a thorough investigation. Although a spokesperson for the IRS refused to comment on the matter, the city of New York did state that they plan to complete an investigation as well.

Charles J. Harder, tax attorney for Donald Trump, said that there was no tax evasion or fraud and that the report contains highly inaccurate information. It was dismissed in a similar way by the White House.

The report stated that Trump received $413 million or more from his father over the course of several decades, and that much of the money he received was obtained through shady tax maneuvers or absolute fraud. The Times alleges that Trump and his father, as well as other relatives, concealed millions of dollars of transfers that were passed from Fred Trump to his children through a business called All County Building Supply & Maintenance, which the Times claims was a sham company set up in 1992.

Tax experts were skeptical about a potential civil investigation by the Internal Revenue Service, claiming that the estate left to Trump by his parents was already subjected to extensive audits. In addition, to allegedly avoid estate taxes, the Times report also stated that Fred Trump did not pay federal gift taxes on seven different pieces of real estate that were signed over to Donald Trump and his siblings.

Beth Shapiro Kaufman, a former Treasury official and tax attorney for Caplin and Drysdale, said that this opens up another potential avenue of investigation.

Kaufman stated that there is usually a three-year statute of limitations on inquiries regarding federal gifts; however that statute does not apply when someone fails to report to the government that a gift was made. Kaufman also stated that according to tax laws, the Internal Revenue Service would be able to pursue the unpaid tax amount from the person on whom the gift was bestowed, even if the giver is no longer alive.

Tax officials in New York were already scrutinizing Trump concerning his charitable foundation and whether or not he misrepresented the foundation to avoid tax liability. Even if such activity is decades old, if it is proven that a person intentionally tried to evade taxes, civil penalties may be implemented. In most cases, if a person is found guilty, he or she must repay the full amount of the back taxes including penalties.

Michael Cohen, former attorney for the President, was subpoenaed by the state of New York in August as part of the probe.