Take Heed, Taxpayers: The IRS Statute of Limitations Has Doubled! 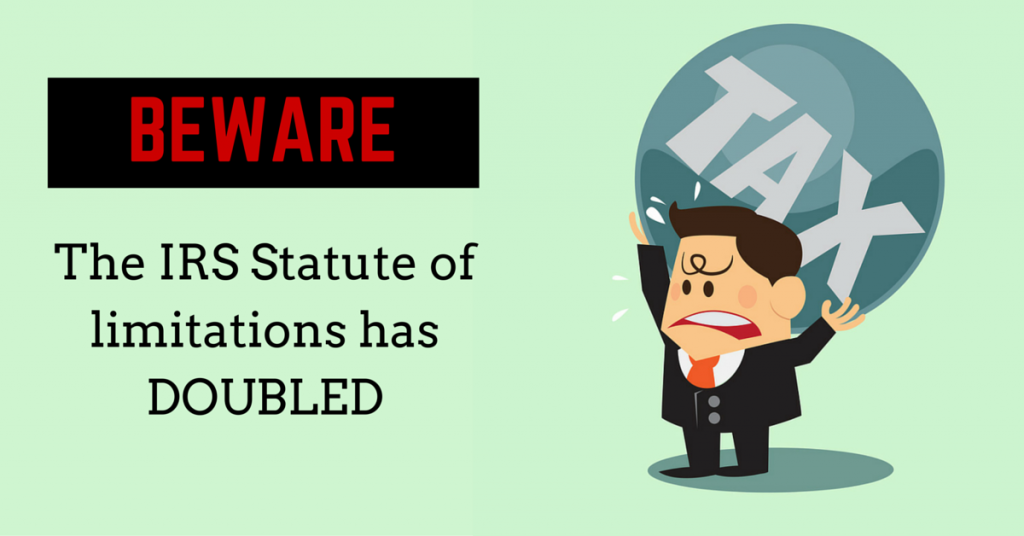 No one wants to be audited by the IRS for any reason, so knowing how long your tax return is subject to scrutiny is vitally important. The statute of limitations on taxes is a fundamental rule allowing taxpayers to eventually be immune from additional IRS tax assessments after a certain amount of time.

Traditionally, the primary IRS statute of limitations on taxes was three years. However, there are many exceptions that give the IRS six years or longer to conduct an audit and assess additional balances. Several of those exceptions are becoming more prevalent, despite a Supreme Court ruling against the IRS.

One such exception is if you omitted more than 25% of your income on your tax return, the three years statute is doubled to six. For years, there was a debate over what it meant to omit income from your return. Virtually all taxpayers and some courts held that to “omit” means to leave off, as in fail to report. However, the IRS said the definition was much broader.

For example, say you sold an asset for $3 million, claiming on your return that your basis, or what you invested in the property, was $1.5 million. In truth, your basis was only $500,000. In effect, instead of paying tax on $2.5 million of profit, you only paid taxes on $1.5 million.

In some recent cases the Supreme Court ruled against the IRS, holding that overstating your basis is not the same as omitting income. The Supreme Court further held that three years was plenty of time for the IRS to conduct audits on tax returns, but Congress overruled the Court and allowed the IRS to increase the statute of limitations to six years in this type of case.

Failure to include certain required forms with a tax return, may keep the statute open indefinitely. Additionally, once an assessment is made against you the statue for the IRS to collect payment is typically 10 years, but the agency can realistically enforce collection for a longer period of time. Indeed, in Beeler v. Commissioner, the Tax Court found Mr. Beeler to be responsible for 30 year-old payroll back taxes!

Frequently, if the IRS says it needs more time to conduct an audit, they will ask you to sign a form extending the statute of limitations. The IRS audit office in San Mateo County often asks taxpayers for additional time. A professional tax attorney would usually analyze various aspect of the case to determine whether it is in the client’s interest to grant or decline such extension. Depending on your circumstances, you may be able to limit the time or scope of the extension.

Trying to make sense of all these waiting periods without the advice of an experienced tax attorney in San Mateo County can make anyone’s head spin. Even if you do your best with your taxes, the process is complicated and ridden with potential pitfalls. For all these reasons, keeping old tax returns, extensive financial records, and checking statutes of limitation and all exceptions carefully are essential to your success with the IRS.

If you have ever done business with a tax attorney in the Bay Area, you know that professional help can make a world of difference when it comes to dealing with the IRS. Contact Tax Helpers today for answers to all of your questions about the IRS statute of limitations, and how they may affect your specific tax situation.