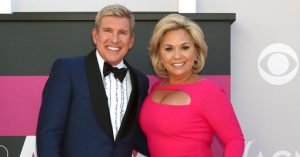 Still trying to maintain their luxurious lifestyle, reality stars Todd and Julie Chrisley requested to travel to the Cayman Islands for the Thanksgiving holidays. The famous couple is currently embroiled in a fraud and tax evasion case.​

Even though the couple tried to state that they would be sharing the vacation time with family, and would only travel via a commercial flight, their request was denied. The judge ruled that holiday travel did not meet the standard of extraordinary circumstances. The judge confirmed that international travel was prohibited for defendants in federal tax evasion cases. Although the Chrisleys had requested temporary management of their passports for the holiday trip, the judge has now ordered that the couple turn over their passport immediately.

In August 2019, the Chrisleys maintained their innocence and pleaded not guilty to tax evasion and a multitude of other federal charges. Their personal tax attorney Peter Tarantino was also indicted on federal charges for allegedly hiding income and lying to the FBI and Internal Revenue Service agents about the Chrisleys’ finances.

Accused with tax evasion for failing to pay almost $2 million in Georgia state taxes from the years 2008-2016, the Chrisleys reached a settlement in October 2019. The Chrisley’s agreement credited them for years where they owed nothing, and for some tax years in which they had paid properly. In the settlement, the reality couple paid close to $150,000 to complete the case. The Department of Revenue stated that after a two-year investigation, it was found that the only money owed was from 2009, and the settlement paid the liability.

In a personal statement to People Magazine, Todd Chrisley said, “Julie and I knew all along that we had done nothing wrong and that when the facts all came out, we would be fine. We’re just glad that the Department of Revenue was willing to keep an open mind and look at all the evidence.”

While the Chrisleys are clear of their state charges, they are still fighting their innocence at a federal level. The couple is still under federal indictment for tax evasion and fraud, along with personal tax accountant Peter Tarantino. The 12-count Atlanta federal indictment charges the Chrisleys and Tarantino with tax evasion, bank fraud, conspiracy, and wire fraud. The federal indictment accuses the Chrisleys of submitting fake financial and bank statements to obtain loans. Other claims in the indictment include hiding their reality show earnings, fabricating financial documents to obtain a California rental property, and failing to file and pay their taxes on time. The couple has pled not guilty to all charges against them.

As a part of their bond release, the Chrisleys are restricted in their travel destinations, with releases only allowed in Georgia, Tennessee, and California. The couple is only allowed to travel within these states for the filming of their popular reality TV shows, “Chrisley Knows Best,” and “Growing Up Chrisley.” When traveling to California, the famous pair must notify their probation officers at all times. Although the U.S. Attorney’s Office did not protest their plan to travel for Thanksgiving during their federal tax case, the judges’ denial shows that this case is still a serious complication for the famous couple.