What is an Offer in Compromise?

How to Settle Back Taxes

The IRS Offer in Compromise is a very valuable and beneficial program that allows qualified tax debtor to reduce their tax debts, sometimes to virtually nothing.  The program has existed for many years and traditionally had a very high rejection rate.  The IRS revamped the program in 2012, as part of its much publicized “Fresh Start Initiative”.  The new and improved settlement program is the “real deal” offering many Americans a chance at tax debt relief.  However, the manner in which the IRS evaluates the offers creates some very interesting results.

The IRS adds the equity in your assets and your net monthly income to determine if you qualify for a settlement.

The IRS looks at the Reasonable Collection Potential  which consists of Realizable Value Of Your Asset and your Future Income.

Once all the numbers are crunched by the IRS examiner, the government will analyze whether the sum of the equity in your assets and the income stream would pay off the tax debt in the amount of time the IRS can legally collect the tax (the statute of limitation is a maximum 120 months from the date of assessment).  This is known as “full pay” and will cause your offer to be rejected.

So let’s get back to the interesting results and see how the offer program works in several case studies.

THIS IS HOW IT WORKS IN REAL LIFE

Two people walk into a tax lawyers office looking to settle their back taxes through the highly publicized IRS Offer In Compromise Program.  If this sounds like a familiar joke, keep reading.

The 10 am appointment was John, a former self-employed mortgage broker and real estate investor who was making $300K to $500K per year during the real estate boom.  Instead of paying his taxes, he used his money to buy and maintain numerous investment properties.  He and his wife both leased very expensive cars. He lived in a $1.5M home, which they got for virtually zero down with an interest only mortgage loan.  As the economy tanked, his business declined by 90% and eventually closed down.

As he was trying to hold on to his properties, John used tax money to pay the mortgages on the properties, which were all “under water”.  He also missed filing 5 years of taxes.  Although he eventually lost the rentals, he managed to hold on to his house, which is now worth $1.2M with a $1.5M mortgage, which he managed to modify to $2800 per month.  John and his wife are still driving very nice new vehicles costing him over $1300 per month.  He now works in the loan department of a major bank, where he earns roughly $96K per year, while his wife is an administrative assistant in a busy medical office, earning $55K per year.  Once they filed the missing tax returns, the tax balance with penalties, and interest totaled roughly $287K, and the IRS started sending threatening letters.

The noon appointment was Carol. A single mother living in a modest 2-bedroom rental with her 14-year-old daughter. Carol drives an 8-year-old Toyota, and has not taken a vacation in 5 years.  Her husband suddenly passed away 3 years ago.  Her tax bill was $39,580, a result of pulling money from a retirement account during her prolonged illness.  Carol worked in HR for the County, earning roughly $78K per year.  She always filed her taxes on time, but she just didn’t budget for the taxes on the retirement withdrawal.

The tax lawyer reviewed both cases, and determined that only one of these clients would qualify for a tax settlement under the Offer In Compromise Program.  This lucky taxpayer would qualify for up to 96% reduction.

So here is the punch line:  The taxpayer who would be granted the much coveted tax relief under the IRS’ Offer in Compromise Program was not the widowed single parent, who survived a debilitating illness, but rather the mortgage broker who was living in an expensive home and driving a one year old BMW.  Carol would have to pay off the entire balance over the next 9 years, while John would have his debt reduced by more than 90%, and allowed up to 2 years to pay off the settled amount.  However, there was a glimmer of hope for Carol.  She may have a shot at some relief from the late payment penalty based on her illness, which, if granted,  would provide her a few thousands in savings.  Of course Carol could revisit the settlement option if her financial condition deteriorated.

Below is the Reasonable Collection Potential for each taxpayer.  Each taxpayer has 107 months remaining on their collection statutes.  The following charts break down each case by the numbers. 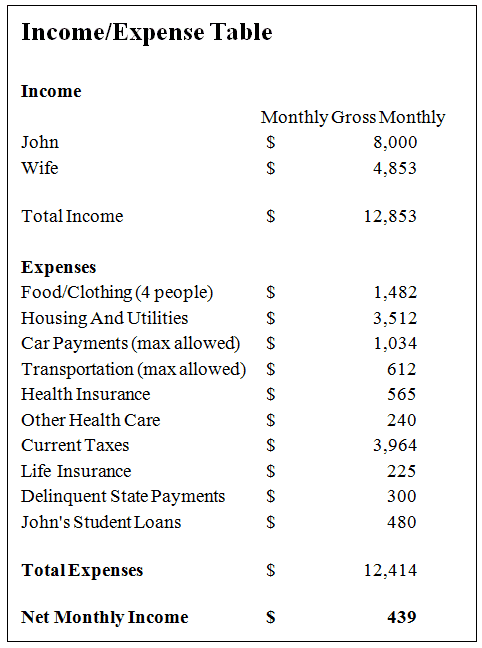 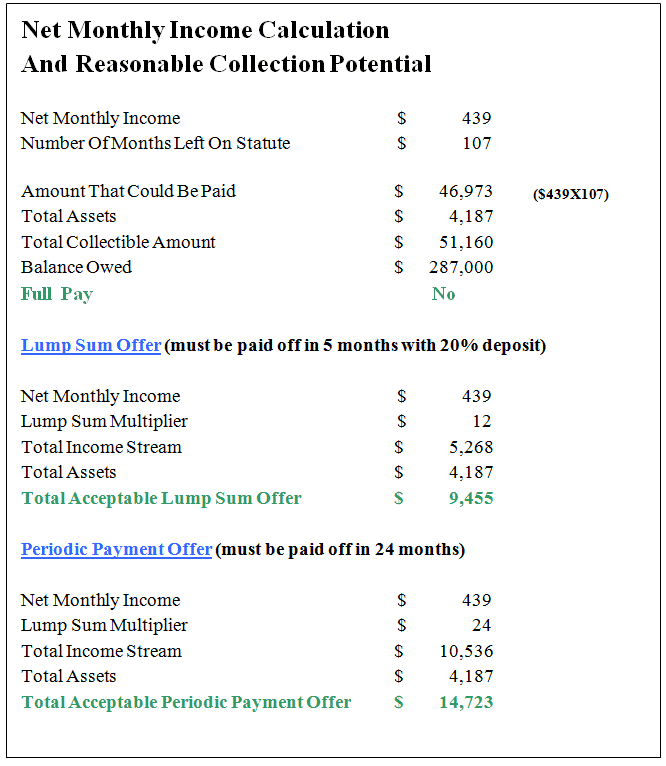 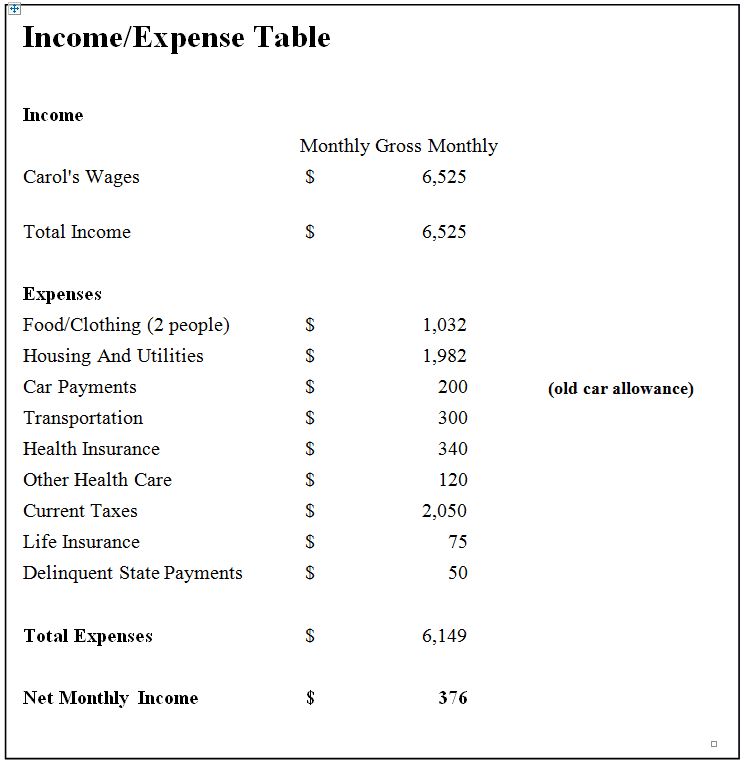