Will Robots Be Doing Your Taxes Soon? 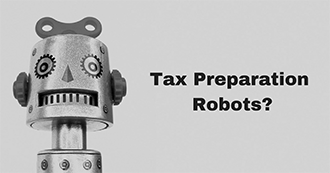 In a world increasingly controlled by technology, it seems inevitable that certain careers will be delegated to robots. From automated checkouts at the supermarket to touch-screen ordering menus at fast food restaurants, more industries are turning to computers to take the place of humans.  What is the newest career to hit the chopping block? Your friendly neighborhood tax preparer. Tax robots are now emerging, and they can do everything from itemizing your deductions, to sending your return to the IRS.

How Tax Robots are Changing the Game

Tax robots are efficient because they rely on predictable historical data to make predictions and analyze information. In industry trials, they have shown to be able to process tax returns with more than 95% accuracy. In the past, the jobs least likely to be affected by technology were those that depended on a human’s touch for their efficacy.

Accountants, lawyers, psychologists and teachers were among the least to worry about how the surge in robotic employees would affect their job security. The game, however, has changed. With artificial intelligence evolving to include voice recognition, text prediction and data analysis, companies are finding it more advantageous than ever to turn to robots to solve their recruiting needs.

While the introduction of technology in the past mainly served the function of helping humans do their jobs better, today’s technology seeks to eliminate them altogether. Innovations in computer systems historically created more jobs for those in the knowledge industry and pink collar administrative sector. Today’s robots are not looking to help. They’re looking to dominate.

Today’s robots are able to use some of the same thinking and reasoning skills that had been previously reserved for humans. They are able to learn, to interact with the world around them and translate data into real tasks that make them more effective than humans. Robots are, in a sense, the most perfect employees. They take no sick days, they are never late for work and as long as they are regularly updated and continually maintained, they work for life. The fact that they make the occasional mistake that may require a human’s oversight is a small problem for such an efficient and cost-saving employee.

With the recent talk about “bringing back jobs,” one can only wonder if this is a promise that will not be fulfilled. The “jobs” that will be brought back won’t necessarily be for the humans who covet them, but for the bot who can do your taxes, book your car rental and teach your son calculus.

While it may seem like doom and gloom is all that will come of these new innovations, not everyone is feeling the heat. Microsoft founder and tech whiz Bill Gates thinks that an all-robot workforce is a good thing, but still emphasizes that there are jobs that will always belong to humans. For all of their skill, robots still cannot find nuance, employ empathy and make independent situational judgment. This is where humans will always have the advantage.

Additionally, Gates recently stated that he believes that if robots are going to take human’s jobs, the owners of said robots should be liable to pay taxes for the ability to utilize robot workers. That’s an idea that should definitely be taken under advisement, given the potential economic repercussions of robots replacing humans in the work force. If robot owners are responsible for some form of tax liability for the use of robot employees, that could be enough of an incentive for employers to continue hiring humans.

The end of tax season is right around the corner. Will this be the end of the road for the trusty accountant as well? Only time will tell.